In ancient days, mankind was formed from the dust of the earth and granted the breath of life by the Andurin, the gods. In the time immediately following humanity’s birth, they were a benevolent people who worshipped the Andurin with devotion and worked together to further their own society. All was well, and the gods were pleased. However, things would not remain so peaceful forever.

The Chaldur, the dark gods, stared up from the abyss into which they had been cast before the beginning of time and saw, for the first time, mankind, the children of the Andurin. Releasing their power like invisible tentacles from the void, the Chaldur infected the humans with an insidious darkness. Bit by bit, the humans fell to their power, becoming a rabid, chaotic people and horrifying the Andurin with the weight of their iniquities. They slaughtered each other like animals, each striving for dominion over the world, each gaining it for a moment only to fall to the blade of his brother. It seemed that the Chaldur had twisted the godlike nature that been imparted to the Andurin’s creation, and the Andurin quickly realized that something had to change. 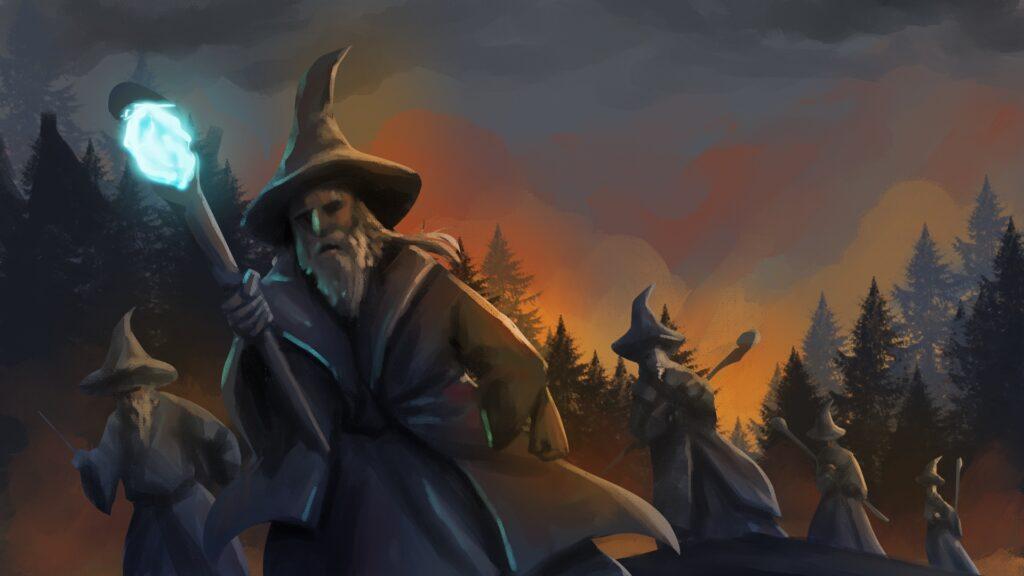 So, one of the Andurin, Elrond, took the form of a human and traveled down into the earth. He roamed the land, finding those humans who remained loyal to the Andurin and disdained the violence and evil of man, and granted them the power of the gods, magic. They gained immortality and other abilities and became known as the Maiar, known to other men as wizards. The Maiar traveled the world independently, acting as peacekeepers and using their power to free those around them from the curse of the Chaldur. But there were those who relished the darkness and would not be freed, and they banded together to wage war on the wizards and the men of the Andurin. So began the age of strife, in which armies of the loyal were led by the Maiar against the armies of the dark warlords of the Chaldur. The war lasted for decades, but eventually the armies of light, bolstered by the Maiar, began slowly to emerge as a superior force to the armies of darkness.

The Chaldur would not give up dominion of the earth so easily, however. So, towards the end of the age, they release their power once again, allowing it to flow into the evil warlords of man to create a dark order of warrior-sorcerers known as the Maldar. Fueled directly by the malice of the Chaldur, the Maldar proved to be unstoppable creatures of shadow, tearing through the armies of light like paper. They hunted the Maiar incessantly, massacring them like sheep until only a handful remained. All seemed lost, and in desperation, Elrond and the remaining Maiar called out to the Andurin for help. And help they did. The Andurin summoned great storms, and unleashing the full force of their power, they smote down the Maldar and their armies, wiping them from the face of the earth. The war had been won, and in order to guarantee that something like it would never happen again, the Andurin created a new order of Maiar, stronger than even before, with Elrond as their leader. A new age of peace and prosperity for humanity had begun.

But the Chaldur still lived on and burned in their hatred for the Andurin and their children, and for the first time in millennia, Elrond began to sense movement from them. It seemed that the Chaldur were preparing to rise. It was time for the Maiar to unite.